I am just starting to take exercise a bit more seriously again in my life and there is a point where you are lifting weights or indeed doing any exercise where your muscles start to burn, it hurts and it is not pleasant. 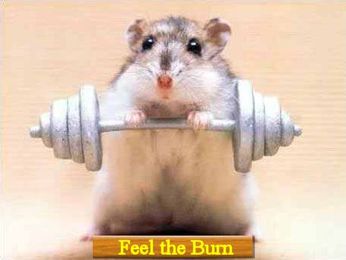 Your instincts are to quit that particular activity, take a break or do something else at least, anything else but if you know anything about how muscles and your body as a total system works you know this is the time not to quit, this is the time to carry on for as long as you can.

At that point your body is going to be getting signals to start convert fat to burn, your muscles are gaining the most use and will correspondingly get their best work out, you’re at the point where you are starting to gain real solid benefits from your exercise.

It’s not that doing less than this isn’t beneficial, it’s just a whole lot less effective then carrying on even when hurting and feeling the burn.

Likewise there are times when we attempt to strengthen our spiritual, emotional or mental state or preferably all three where we suffer, we feel in pain or at least massive discomfort and it is hard to see the benefits of carrying on in that moment, so easy to quit, or at least find something else which benefits us in a lesser way but at least doesn’t hurt so much.

But these are not the times to quit, these are the times to push through, strengthen our emaan, our character, our minds and through momentary suffering and sacrifice become a better person on the other side.

There are parts of you and me, disgustingly fat slothful parts of our minds and character which desperately need a workout or burning out entirely to clear space for more productive growth and habits in our lives.

I and and I know many people reading this are physically unhealthy in the damage done to our bodies through years of neglect and ill-treatment, we do need to feel that burn to strengthen our physical bodies, our vessels that Allah has given us as a trust here on this earth.

But how many of us are equally guilty of doing little or maybe only just enough to sharpen our intellect, to build true meaningful character or to make our emaan a shining light?

Discipline begets discipline, the more we strengthen one aspect of our lives, the easier it is to bring that discipline in elsewhere to transform ourselves into the best versions we can be.

Look at my mother and sister crying hysterically
Banging on the doors and windows frantically
Their eyes wild with fear, the kind I too well recognise
Begging me to stop, watching them agonise

I cannot live it’s not the guilt alone
I sought great pleasure in battlefield and war zone
Western hero, the great soldier I was
Seeking great pleasure getting a kick and a buzz

While watching the life suck out of my victim’s eyes
Their family pleading me to stop as each one dies
They were all innocent that we knew so well
But were they humans? We couldn’t tell
They weren’t civilised like we are- so we were told
They didn’t deserve their property; natural resources like oil and gold

My soldier buddies all committed suicide
I was the only one of them left that hadn’t died
But now I’m sat here in my car as reality blurs
My own mother and sister look like one of the victim’s girls’
Who cried out for their father as I sniggered at them verminously
And shot their father dead in cold blood, mercilessly

Sometimes we can be over-critical of ourselves. Klaudia Khan offers some Qur’anic pearls to help us get over sins of the past.

“Allah’s Messenger (SAW) said: If you were not to commit sins, Allah would have swept you out of existence and would have replaced you by another people who have committed sin, and then asked forgiveness from Allah, and He would have granted them pardon.” (Muslim, 37:6621)

Making mistakes is a part of life. Islam teaches that we should strive for excellence, not for perfection, because the latter is unobtainable for any human being. We just have to accept that however hard we try, there have been and will be times when we wrong ourselves. Alhamdulillah, making mistakes doesn’t automatically make us losers, because Allah I in His mercy taught us that we should repent for our sins and ask forgiveness and we shall be forgiven, insha Allah.

“He is the One that accepts repentance from His Servants and forgives sins: and He knows all that ye do.” (Ash-Shura:25)

The Qur’an reminds us in numerous verses that one of the names and attributes of Allah (SWT) is Al-Ghaffar – The Oft-Forgiving, The All-Forgiving.

”Despair not of the Mercy of Allah: for Allah forgives all sins: for He is Oft-Forgiving, Most Merciful.” (Az-Zumar:53)

“But seek the forgiveness of Allah; for Allah is Oft-forgiving, Most Merciful.” (An-Nisa:106)
Seeking Allah’s forgiveness, especially in the early hours of the morning as the Prophet (SAW) used to do, is one of the best forms of worship and through it Allah’s attribute of Al-Ghaffar comes into effect. We believe that Allah I will forgive us every time we transgress as long as we repent, because He himself told us so in the Quran:

“For Allah doth blot out (sins) and forgive again and again.” (An-Nisa:99)

We are also encouraged to forgive others as we wish for ourselves to be forgiven. Holding a grudge is not befitting any Muslim and the last person you’d want to resent is yourself.

Feeling guilty over mistakes is normal. It shows that our conscience is healthy and it leads to repentance which is necessary for obtaining Allah’s forgiveness. In that sense guilt may be constructive. But sometimes, instead of leading to liberation remorse becomes oppressive. If we keep on recalling past sins and blaming ourselves again and again, the guilt becomes a burden that makes our spiritual, social or mental progress impossible. We cannot go forward, get over our wrongdoing and start doing something good, because guilt has us rooted to that one point in our lives. Worse still, the excessive guilt may lead to committing more mistakes. For example, if we acted wrongly towards our parents or children and we cannot get over feeling guilty about it, we might instead start believing that we have become bad daughters or bad mothers. Attaching these mental labels to ourselves won’t help us in changing for better, in mending our ways and making up to the people we have wronged.

“And establish regular prayers at the two ends of the day and at the approaches of the night: For those things that are good remove those that are evil: Be that the word of remembrance to those who remember (their Lord).” (Hud:114)

Sometimes we might feel that our bad deeds have amounted to so much that our lifetime would not be enough to counterweigh them with good deeds. Yet Allah (SWT) in His mercy revealed to us that good deeds can wipe away our bad deeds. The Prophet taught us that best of deeds is the sincere belief in Allah (SWT) (Bukhari 1:148). So when changing for the better, this should be our starting point. Trust Allah (SWT) and believe in all He has revealed to us through His Prophets. And once your soul is back on the right track, your heart and your mind will follow and good deeds will be the natural consequence of your faith.

There are also some duas which Prophet Muhammad (SAW) taught us and which have the power to wipe away sins if said with sincere belief in Allah (SWT). These are: “La ilaha illa Allah wahdahu la sharika lahu, lahu-l-mulk wa lahu-l-hamd wa huwa ‘ala kulli shay’in qadir” (None has the right to be worshipped but Allah. He is the Only One and has no partners. For Him is the Kingdom and all the praises are due for Him. He is Omnipotent).

Another supplication is: ‘Subhan Allah wa bihamdihi’ (Glory be to Allah and His is the praise), and whoever repeats it hundred times a day, “will be forgiven all his sins even if they were as much as the foam of the sea.” (Bukhari 75:414)

“Say to the Unbelievers, if (now) they desist (from Unbelief), their past would be forgiven them”(Al Anfal:38). Those who revert to Islam start their record afresh: all previous sins committed while they were ignorant are forgiven. As a revert myself, I remember the day of my shahada, the first day of my life as a Muslim, as a profoundly joyous one. I truly felt like if my life was beginning anew and this feeling was very uplifting and liberating. Whenever in my life I happen to go astray I remind myself of that feeling, of the mercy of Allah’s forgiveness and this helps me turn the page and start a new day with a resolution to make it better than the last one. This is what I ask of Allah (SWT) in my everyday prayer: to help me become a better Muslim day by day.

What has been done has been done – we cannot deny it nor forget it. The past wrongdoings can serve us as a reminder of our weakness and a warning not to commit the same mistake twice, but that’s it. In Islam there is no concept of suffering, especially that imposed on oneself, as a mean to achieve Allah’s love and mercy. Whatever befalls us – all the trials of goodness and difficulty – happens to test us and we should remain patient in all circumstances. Committing sins is often referred to by the Prophet (SAW) as ‘wronging oneself’ and it does bring pain and remorse. But there is no need to deepen our suffering through constant remembering of failure. Instead we should be grateful to Allah (SWT) for each day He gives us in which we get a chance to make up for the bad deeds by doing good deeds. And the gratefulness should lead to contentment. Allah (SWT) wants us to be happy. “In the bounty of Allah. And in His Mercy, in that let them rejoice”(Yunus:58)

The Quran that Allah (SWT) blessed us with is often referred to as ‘glad tidings’ and it confers the message of Allah’s great mercy and of His forgiveness. Forgiving Allah’s blessings may lead us astray as in Quran we read:”The Evil one threatens you with poverty and bids you to conduct unseemly. Allah promiseth you His forgiveness and bounties. And Allah careth for all and He knoweth all things.” (Al-Baqarah:268) Let’s not get distracted by Satan and his baseless threats. Forgiveness is within our reach, we just need to ask Allah I for it and start mending our ways straight away. “Then which of the favours of your Lord will ye deny?” (Surah Ar-Rahman)

Klaudia Khan is a writer finding inspiration in real stories people tell her every day. She lives with her husband and two daughters in Pakistan and the UK.