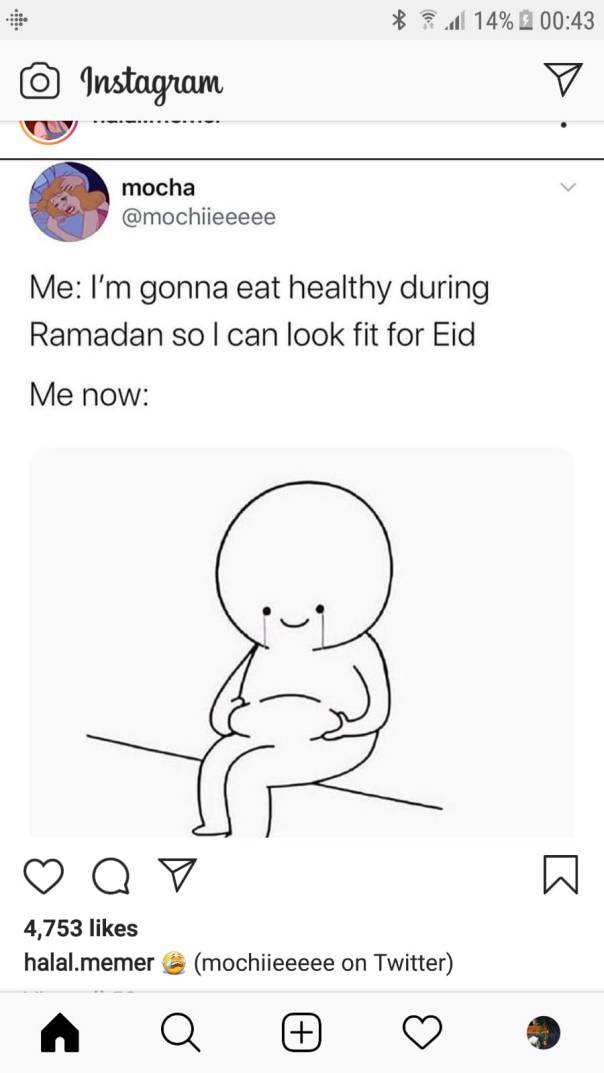 Alhamdulillah, all praise is due to Allah, we should all be thankful to have reached another Ramadhan, even if it is a strange one, and that we’re not been among those who we celebrated Eid with after fasting last year, only for them to not reach this month with us again.

After that sad note, and being grateful to Allah I wanted to write about Ramadhan (or Ramadan if you prefer) being so quiet and peaceful this year and how much I feel I am benefiting from this month, this time around, even more so than other years.

Don’t get me wrong, there are obvious and massive benefits in the usual way we go about Ramadhan, with work, fasting and then quickly onto our iftar before going to the Masjid for Taraweeh, before we sleep what little we can, then repeat. It’s a struggle at times, but spiritually rewarding to strive in this way but this year I am finding I am more and more at peace with myself, able to walk with my wife and my children or just by myself, to spend time to think, reflect upon how we are living our lives and what is really important.

We are getting more time also as a family in the home, as I work from desk in the dining room, able to turn and see my kids as they come downstairs on waking up, able to chat with them, knowing them as they grow up that little bit better, or just enjoy seeing them go about their daily lives.

I am also able to give more quality time to my Quran, and not just snatching a few minutes reading on the bus on my mobile phone, and we’re able to pray our salaat together as a family.

So it’s a very different feeling, and one I don’t want to lose when Ramadhan is finished this year as there is really no reason we cannot do many of these things outside of Ramadhan also if we wanted to.

This month is meant to be a time we turn back to Allah, but also one where for 30 days we can build up good habits we wish to continue for the rest of the year.

So this year I want to give myself and my family more time, to reflect on how much of my busy life was really necessary and how much I can give away to gain again this peace and tranquility, rather than falling back into the hustle and bustle of life once the Corona Virus / Covid 19 lock-down is lifted.

I think we’d all find there are large parts of our lives, we simply don’t need and which don’t benefit us, which also come at a cost of losing a little of ourselves and our family life and so let’s use this quiet time during lock-down to reflect and learn to spend our time wisely again.

Eid Mubarak from Gingerbeardman and fam

Source:  Bits and Pieces – Desirable acts on the day of Eid

The Sunnahs that the Muslim should observe on the day of Eid are as follows:

1 – Doing ghusl before going out to the prayer.

It was narrated in a sahih hadeeth in al-Muwatta’ and elsewhere that ‘Abd-Allaah ibn ‘Umar used to do ghusl on the day of al-Fitr before going out to the prayer-place in the morning. Al-Muwatta’ 428.

Al-Nawawi (may Allaah have mercy on him) said that the Muslims were unanimously agreed that it is mustahabb (recommended) to do ghusl for Eid prayer. The reason why it is mustahabb is the same reason as that for doing ghusl before Jumu’ah and other public gatherings. Rather on Eid the reason is even stronger.

2 – Eating before going out to pray on Eid al-Fitr and after the prayer on Eid al-Adha:

Part of the etiquette is not to go out to pray on Eid al-Fitr until one has eaten some dates, because of the hadeeth narrated by al-Bukhaari from Anas ibn Maalik, who said that the Messenger of Allaah (peace and blessings of Allaah be upon him) used not to go out on the morning of Eid al-Fitr until he had eaten some dates… of which he would eat an odd number. Al-Bukhaari, 953.

It is mustahabb to eat before going out to emphasize the fact that it is forbidden to fast on that day and to demonstrate that the fast has ended.

Ibn Hajar (may Allaah have mercy on him) suggested that the reason for that was so as to ward off the possibility of adding to the fast, and to hasten to obey the command of Allaah. Al-Fath, 2/446

Whoever does not have any dates may break his fast with anything that is permissible.

This is one of the greatest Sunnahs on the day of Eid because Allah says (interpretation of the meaning):

“(He wants that you) must complete the same number (of days), and that you must magnify Allaah [i.e. to say Takbeer (Allaahu Akbar: Allaah is the Most Great)] for having guided you so that you may be grateful to Him” [al-Baqarah 2:185]

It was narrated that al-Waleed ibn Muslim said: I asked al-Awzaa’i and Maalik ibn Anas about saying Takbeer out loud on the two Eids. They said, Yes, ‘Abd-Allaah ibn ‘Umar used to say it out loud on the day of al-Fitr until the imam came out (to lead the prayers).

It was narrated in a sahih report that ‘Abd al-Rahmaan al-Sulami said, “They emphasized it more on the day of al-Fitr than the day of al-Adha.”. Wakee’ said, this refers to the takbeer. See Irwa’ al-Ghaleel, 3/122/

Al-Daaraqutni and others narrated that on the morning of Eid al-Fitr and Eid al-Adha, Ibn ‘Umar would strive hard in reciting takbeer until he came to the prayer place, then he would recite takbeer until the imam came out.

Saying takbeer when coming out of one’s house to the prayer place and until the imam came out was something that was well known among the salaf (early generations). This has been narrated by a number of scholars such as Ibn Abi Shaybah, ‘Abd a l-Razzaaq and al-Firyaabi in Ahkaam al-Eidayn from a group of the salaf. For example, Naafi’ ibn Jubayr used to recite takbeer and was astonished that the people did not do so, and he said, “Why do you not recite takbeer?”

Ibn Shihaab al-Zuhri (may Allaah have mercy on him) used to say, “The people used to recite takbeer from the time they came out of their houses until the imam came in.”

The time for takbeer on Eid al-Fitr starts from the night before Eid until the imam enters to lead the Eid prayer.

Description of the takbeer:

It was narrated in the Musannaf of Ibn Abi Shaybah with a saheeh isnaad from Ibn Mas’ood (may Allaah be pleased with him) that he used to recite takbeer during the days of tashreeq:

It was also narrated elsewhere by Ibn Abi Shaybah with the same isnad, but with the phrase “Allahu akbar” repeated three times.

The etiquette of Eid also includes the congratulations and good wishes exchanged by people, no matter what the wording, such as saying to one another Taqabbala Allaah minna wa minkum (May Allaah accept (good deeds) from us and from you” or “Eid mubaarak” and other permissible expressions of congratulations.

It was narrated that Jubayr ibn Nufayr said: When the companions of the Prophet (peace and blessings of Allaah be upon him) met one another on the day of Eid, they would say to one another, “May Allaah accept (good deeds) from us and from you.”

Offering congratulations was something that was well known among the Sahaabah, and scholars such as Imam Ahmad and others allowed it. There is evidence which suggests that it is prescribed to offer congratulations and good wishes on special occasions, and that the Sahaabah congratulated one another when good things happened, such as when Allaah accepted the repentance of a man, they went and congratulated him for that, and so on.

Undoubtedly these congratulations are among the noble characteristics among the Muslims.

The least that may be said concerning the subject of congratulations is that you should return the greetings of those who congratulate you on Eid, and keep quiet if others keep quiet, as Imam Ahmad (may Allaah have mercy on him) said: If anyone congratulates you, then respond, otherwise do not initiate it.

5 – Adorning oneself on the occasion of Eid.

The Prophet (peace and blessings of Allaah be upon him) agreed with ‘Umar on the idea of adorning oneself for Eid, but he denounced him for choosing this cloak because it was made of silk.

It was narrated that Jaabir (may Allaah be pleased with him) said: The Prophet (peace and blessings of Allaah be upon him) had a cloak which he would wear on the two Eids and on Fridays. Saheeh Ibn Khuzaymah, 1756,

Al-Bayhaqi narrated with a saheeh isnaad that Ibn ‘Umar used to wear his best clothes on Eid.

So a man should wear the best clothes that he has when going out for Eid.

With regard to women, they should avoid adorning themselves when they go out for Eid, because they are forbidden to show off their adornments to non-mahram men. It is also haraam for a woman who wants to go out to put on perfume or to expose men to temptation, because they are only going out for the purpose of worship.

6 – Going to the prayer by one route and returning by another.

It was narrated that Jaabir ibn ‘Abd-Allaah (may Allaah be pleased with him) said: On the day of Eid, the Prophet (peace and blessings of Allaah be upon him) used to vary his route. Narrated by al-Bukhaari, 986.

Mary had a little lamb
And Mary’s Pakistani
Today it’s Eid, she’s with her fam
Now the lamb is biryani!

Eid Mubarak from the Gingerbeardman and family, Taqabbal Allahu minna wa minkum, may Allaah accept from us and from you.

And a belated EID MUBARAK! TaqabAllahu minna wa minkum, May Allah accept from us and from you. OK I’m late, I know but been a bit too busy with family in the past couple of weeks to post anything and the blog is not my full time job or anything so forgive me on that.

So I hope you all had wonderful Eid celebrations and not too many of you spent your time and money throwing a welcome back party for Shaitan as too many do these days, throwing away your good deeds.

If you did… then make tawbah and remember the purpose of Ramadhan. It’s is meant to be time of purification, and I am not talking about a one-month detox before you spend the other 11 months on one big bender kinda-purification. No, instead Allaah states in the Quran:

O you who have believed, decreed upon you is fasting as it was decreed upon those before you that you may become righteous
Quran translation, Surah al Baqarah, 2:183

So now use all those times you got into the habit of making du’a in Ramadhan by doing so again now, asking Allaah to forgive you, follow up an evil deed with a good deed.

On the authority of Abu Dharr Jundub ibn Junadah, and Abu ‘Abd-ir-Rahman Mu’adh bin Jabal (may Allah be pleased with them) that the Messenger of Allah (peace and blessing of Allah be upon him) said: “Be conscious of Allah wherever you are. Follow the bad deed with a good one to erase it, and engage others with beautiful character.”
Related by Tirmidhi

I ask Allaah that he accepts your deeds and my deeds this ramadhan and forgives us our shortcomings, helps purify our deeds and intentions and makes us better believers for the whole year, not just one month, ameen.