RE the sister getting told to remove her hijab by the armed Nice Police in France, no I won’t be sharing the image and shame on those who have done so already.

Where is your protective jealously for our sister? What if it was your wife, daughter, mother or sister, would you be happy with her image being shared and looked at by all these men on social media? 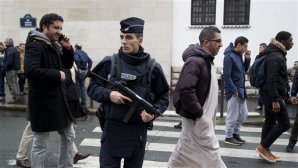 Yes the oppression in this case is terrible, part of the wider oppression felt by the Muslims in France, especially our sisters who are being literally forced by gun-toting cops to uncover themselves and take clothing off in public, but that in no way justifies you sharing such images.

Given the background of the image with semi-naked men and women do you even think it’s appropriate or even permissible to share such an image anyway even if the sisters face is not clear / blocked out?

It’s like all the people sharing images of models in Burkinis to show a visual image of the French ban on this item of clothing and claiming you are sharing such images to defend modesty… Stupid doesn’t even begin to cover such people.

Here is a Fatwah from Sheikh Muhammad Saalih al-Munajjid at Islam Q&A on women sharing their image on social media, I hope the intelligent among you would realize if this applies to sisters sharing images of themselves, it applies doubly to men sharing these pictures of sisters in hijab or even worst actual indecent images.

We need to remember such dhulm is a test, a trial and yes sometimes a punishment from Allaah and that to end such oppression doesn’t just mean denouncing it, but that as Muslims we need to wake up and return to our deen and that Allaah informs us in the Quran:

For each one are successive [angels] before and behind him who protect him by the decree of Allah . Indeed, Allah will not change the condition of a people until they change what is in themselves. And when Allah intends for a people ill, there is no repelling it. And there is not for them besides Him any patron.
Quran translation, Surah ar-Ra’d, 13:11